The fact that the euro area has entered a double-dip recession has long been known. However, the revised quarter-on-quarter data for the first quarter of 2021 showed that the contraction rate (-0.3%) was smaller than expected (-0.6%). The major euro area economies, Germany, France, Spain, and the Netherlands led the way, and their respective economies shrank again.

Before the formal discussion, there are many reports that continue to blame the obligations surrounding Northern Ireland after Brexit. The Brexit Secretary Lord Frost expressed dissatisfaction with the EU’s alleged rigidity on Northern Ireland-related issues, while the Irish Foreign Minister said: “The EU continues to propose new solutions.”

The daily chart shows how the currency pair has traded within a channel (0.8540-0.8730) since the end of February this year because the ATR readings show that the trading volume seems to have fallen further. The 0.8470 area was strongly rejected, leading to continued trading within the channel, with the 76.4% Fibonacci level (pulled from the February 2020 low to the March 200 high) as support. 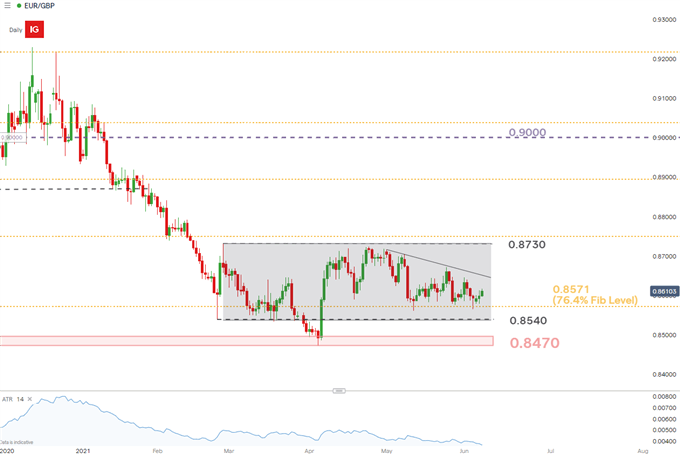 Prepare for any major progress that may occur in the negotiations between the EU and the UK on Wednesday. Looking closely at the 4-hour chart, the price movement is currently testing the 0.8615 level, which has been a resistance level since mid-April. Breaking through this level and staying above the short-term downtrend line may make the 0.8645 level work as an important resistance level. However, it needs to break through the May high (0.8650) to achieve a larger and more sustained bull market. However, rejection of the 0.8615 level may result in the currency pair continuing to trade between the smaller areas between 0.8615 and 0.8580, with a potential downward trend, highlighting 76.4% Fib as support. 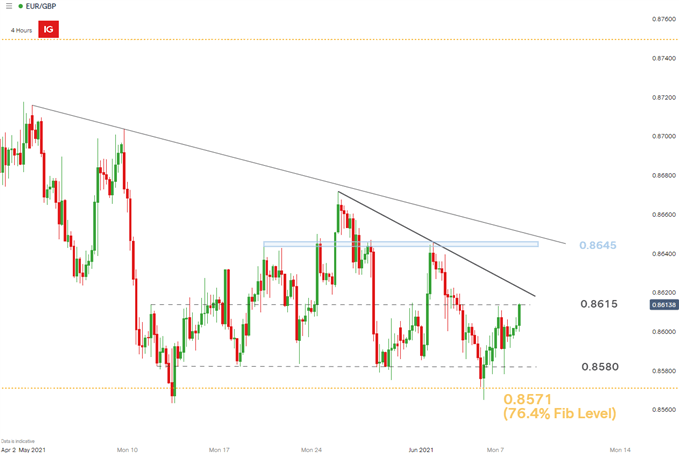 — Written by Richard Snow for DailyFX