Since the economy began to recover from the impact of the Covid-19 pandemic, the town’s topics have been inflation and monetary policy. There is no doubt that the central bank will become the focus in the next few months, and the performance of one bank relative to another is likely to become one of the main drivers of currency pairs in the third quarter. Look at the Euro/Canadian dollar from the perspective of central bank differentiation, as one seems to be leading the way in interest rate decision-making, while the other is still lagging behind.
I have to say that I was surprised to see the EUR/CAD stay within a narrow range. Between May and June, because April is preparing for the turbulent second quarter. In other words, the trend quickly reversed, and the currency pair was almost in a trading state at the end of the first quarter, providing a good opportunity for the third quarter. The Bank of Canada was one of the first developed country banks to announce a reduction in quantitative easing programs because the bank made adjustments to adapt to the improvement of domestic economic conditions. Interest rate forecasts remain unchanged until mid-2022, but investors may expect policy changes before then, especially due to the continued rise in oil prices. 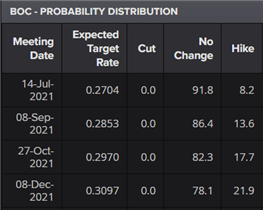 At the same time, the European Central Bank may remain cautious about changes in monetary policy until stronger economic data show that the situation has improved. After the 2011 collapse, they will want to avoid the mistake of raising interest rates too early to revive the Eurozone economy and then canceling the flexible financing terms. At least market participants believe that the implied probability of a rate hike in December is 5%, while the Bank of Canada’s interest rate is nearly 22%. 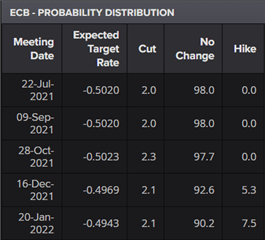 Therefore, although monetary policy tightening is likely to be traded in Canadian dollars, the possibility that oil prices will continue to rise and the stronger economic data than in the Eurozone make me recommend shorting the Euro/Canadian dollar. the third quater. The weekly chart shows that starting from the December 2020 high, a complete downward trend line limits the mid-term rise of the currency pair. On the same chart, looking forward to 2019 and 2017, there is a clear long-term support area near 1.4430, which will be my target for the Euro/Canadian dollar in the third quarter.