British Pound On Alert for Comments from BOE Members

Although the GBP/USD has experienced a difficult week, the Bank of England’s expectation that it will be more aggressive still provides support for the GBP. As the market increases the possibility that the Bank of England will begin to adjust its monetary policy to better adapt to current economic conditions, the preparations for the August Monetary Policy Committee meeting are attracting more attention.
Michael Saunders was the focus on Thursday. He mentioned that inflation may remain high in the coming months and hinted at the possibility of raising interest rates in the first half of 2022. Prior to this, Ramsden had quickly developed since the last forecast was released in May, considering that the time of the decline was earlier than originally expected.
Looking ahead to the British calendar next week, we will have another member of the Bank of England giving a speech on Monday (Haskel), and then there will be little other news until the June retail sales and purchasing managers index (PMI) is released on Friday. 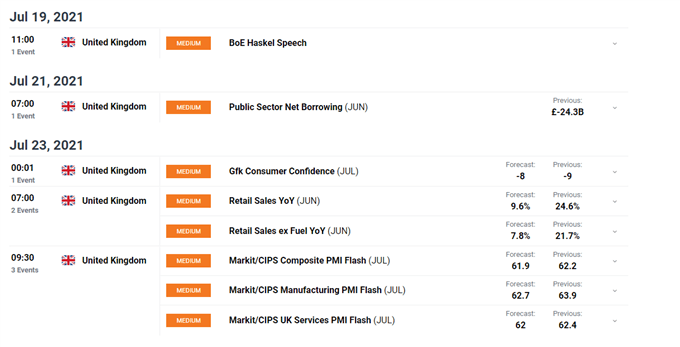 From the perspective of the GBP cross, if the GBP/USD cannot maintain above its 200-DMA (1.3808) before entering the new week, the GBP/USD may fall below 1.30. The stochastic indicator showed a slight negative bias in the short term, but there is still room for bullishness to 1.39, which proved to be a strong resistance to cracking. For the EUR/GBP, as the currency pair was close to the 0.85 mark earlier this week, as it tried to consolidate and break through the downward channel that has been trading for the past 3 months, the pressure continues to lean towards the downside. Breaking below this zone may lead to further attempts to break below the April annual low of 0.8472.